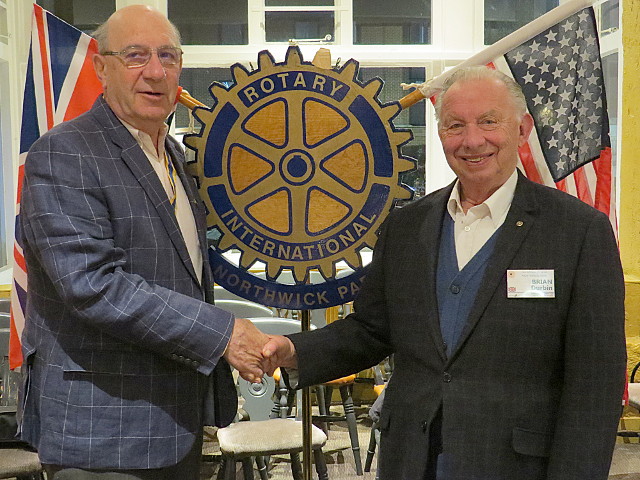 Our speaker on 27 February was our own member Brian who spoke about his career as a pharmacist. Before Brian spoke, there was some Good News to report, and an offer of milk bottle tops from an RAF Sergeant!  There was a shuffle of dates in March so that there will be time for a Membership Discussion on 27 March 2019, and a date has been set for the Club Quiz of 06 April at St Albans Church Hall, North Harrow.  There was time for the Dementia Club Roster to be agreed, but no one was willing to represent the Club at the RIBI Business meeting which is no longer face to face, and has been scheduled for a Bank Holiday weekend!  The thought of several hundred individuals taking part in an on-line meeting was mentioned by members!

Then it was Brian’s turn.  Brian had had a long career as a pharmacist, owning a chain of chemist/pharmacy shops.  He had made an inauspicious start with a Saturday job in his local pharmacy as described below:

He had worked in Dolphin Square, London where he had met Bud Flanagan and Arthur Askey at a time when all prescriptions were hand-written and subject to the vagaries of the Doctor’s handwriting!   Having started work in 1963, by 1980 retail pharmacy had lost its appeal, and he ventured into exporting to Hong Kong and Nigeria.  The business grew rapidly through personal recommendation, and for another 19 years he dealt with the ‘interesting’ characters who were his customers.  He told many stories, including the leather coat, the money stored in the heel of shoes, and the products he supplied.

Thank you Brian for a most interesting talk.