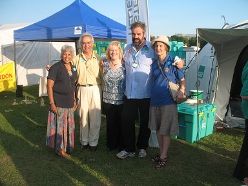 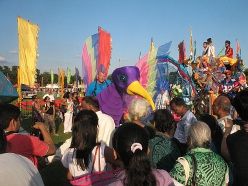 The Rotary Club of Northwick Park was well represented at the London Mela in Gunnersbury Park on 19 August 2012.

As well as 7 sound stages, a large funfair and too many food outlets to count, there was a section devoted to service clubs and charities. Sponsored by Rotary in London and equiped by Shelterbox, the stand had a steady stream of visitors throughout the afternoon.

Dick and June arrived at the free event just as it opened and spoke to many service minded individuals who came up to the stand to talk about Rotaryand about the Shelterbox Project.

There was also a Carnival Procession around the park with many fantastic carnival animals and several marching bands.

The weather played a key part in what was an enormous turnout.

See the Hi-Res pictures in our Photo Albums, and watch the video in the Video Albums.