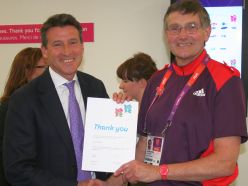 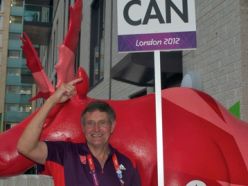 Mike Billington, who is a member of the Rotary Club of Northwick Park, has just completed around 1,500 hours volunteering for the Olympics. When the Games were awarded to London in 2005, Mike, who is also a member of the Metros running Club, was so excited at the prospect he entered his name as a volunteer the next day.

In 1967, Mike went on a high altitude training camp in the Pyrenees as an Olympic possible for the 1500 metres in the Mexico City games. Sadly he didn’t make the team and felt this was his only opportunity to take part in the Olympics.

Mike started volunteering in April 2010 as a Trailblazer assisting the ‘Volunteer Team’, in the LOCOG headquarters, who organised the whole Gamesmaker programme. In addition, to this he acted as a Selection Event Volunteer, interviewing more than 200  Gamesmaker candidates. He was also Training Event Host, welcoming volunteers to their training sessions. In addition to this, for three months, he helped to distribute the Gamesmaker uniforms.

During the Olympics Mike was assigned to the Canadian Team as a NOC Assistant working in the Olympic Village, from the day the advance party arrived in early July to when they finally left on  15August. His most memorable moments were being at the ‘Welcoming Ceremony’ for the team, walking with them to just outside the Stadium for the Opening Ceremony and taking four rowers from the Rowing Eight team, who won the Silver medal, to Canada House for a reception. It was an interesting drive with four large rowers and Mike, who is six foot, in a BMW 3 series! He also says it will take a long time for him to forget the goodwill, friendship, energy and vibrancy in the Village plus the amazing atmosphere in the Olympic Park.

Mike says that the Canadians were a great team to work with as they provided the volunteer team a room equipped with a TV, fridge, coffee machine and two computers, plus an endless supply of cold drinks & Canadian snacks! He also commented that they took them to the Athletes’ Dining Room twice for meals and then out to a restaurant for dinner as a thank you for all their help and assistance.

At the end, the village was a little sad, when compared to the atmosphere a week before, because all the athletes and support staff had left and it was a cloudy, rainy day. So what now? The Paralympics, when Mike will have the same role with the team from the Faroe Isles, to which he is looking forward with great anticipation.