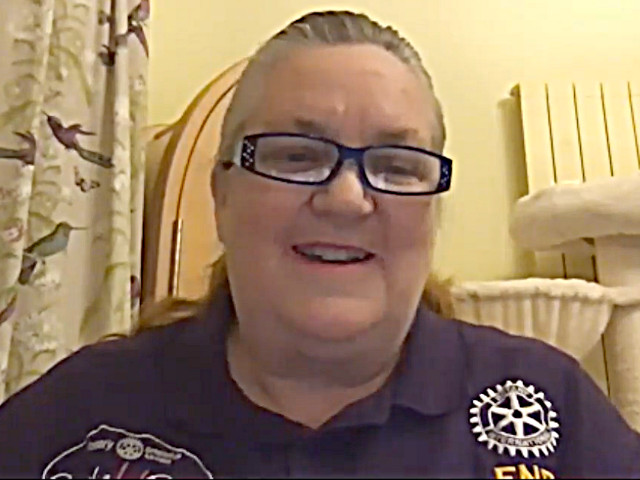 Our meeting on 28 October 2020 was a reference back to World Polio Day on 24 October 2020, with a speaker from Rotary International in Great Britain and Ireland providing the latest information on our progress to eradicate polio.

Our speaker was Jannine Birtwistle from the Rotary Club of Guernsey, in the Channel Islands.  In an illustrated talk, she took us through the history of Rotary’s campaign to eradicate polio from the face of the planet – a pledge which Rotarians made to the children of the world in 1985, some 35 years ago.

There have been problems – the duration of the project speaks to those.   There are currently two major issues that Rotary is working on: the two countries in the world where the wild polio virus is still endemic – Afghanistan and Pakistan (in alphabetical order), and the second major issue is the cVDPV (circulating vaccine derived polio virus).  This is not polio contracted directly from the vaccine – an incorrect assumption that many people make based on the name.  The oral polio vaccine is safe, but the protection it offers can be transmitted from a child that receives the vaccine to the child’s family and friends.  If that transmission takes place many times, there is eventually a risk that the attenuated virus in the vaccine mutates after multiple transmissions.  If a child, that has never received any polio vaccine, meets the mutated virus from another child, there is a risk of polio.  There is a simple way out of this bind, and that involves insuring that every child receives the oral polio vaccine direct, and not through transmission, fourth or fifth hand.

There is also the injected vaccine in which the virus is not attenuated, but has been killed.  This is referred to as IPV (inactivated polio virus) vaccine.  The human body develops the necessary antibodies to the dead virus, so that the child becomes protected.  However, with IPV there is no onward transmission to family and friends.

Our best year to date was 2018 when there were just 33 cases of wild polio virus in the world.  However, this year, with the Covid-19 pandemic, polio immunisation of children had to stop in some countries, and as a result the number of cases has risen sharply in the two countries. That said, the laboratories and infrastructure that were established by Rotary for the polio eradication campaign were set up to be transferable to other uses, and many have proved vital in the control of Covid-19.

Progress has continued, and on 25 August 2020, the World Health Organisation declared that the African Region was now clear of Wild Polio Viruses and the disease was no longer endemic there.

This was a serious but fascinating presentation, and all the members were very appreciative of Jannine’s talk.