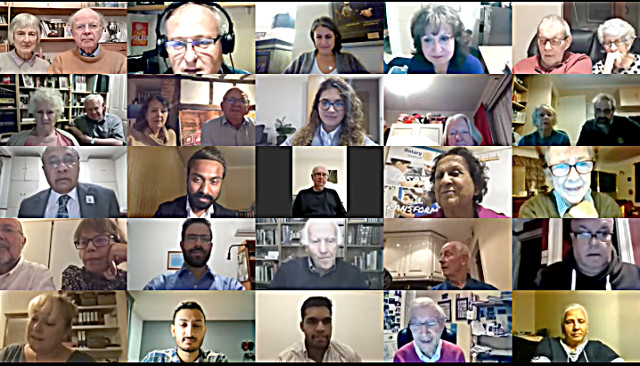 Our meeting on Wednesday 21 October 2020 was supported by the presence of 23 Members, 10 District and National Dignitaries, 14 Satellite Club Members and 8 visiting guests!  55 people at one meeting brings its own challenges, but several screens were shared by couples attending together on a single screen.

The purpose of the meeting was the chartering of the Satellite Club of Northwick Park, a cause for celebration as it brings the number of members in our Club up by 14, pending the Club being strong enough to launch out on its own.

The Chairman of the new club spoke about their plans, including support for Kids Out, and for Education and Literacy which they see as important and vital.  Our District Governor, Francis Uwaechi, was the guest of honour and congratulated both the members of the new club, and the members of Northwick Park for agreeing to sponsor the new club.

There was also thanks for the District Team who have worked hard behind the scenes putting the membership of the Club together over several months.  It is now our job to mentor the new club, and with Past District Governors, and a handful of current District Officers, they are likely to get the best that is available.