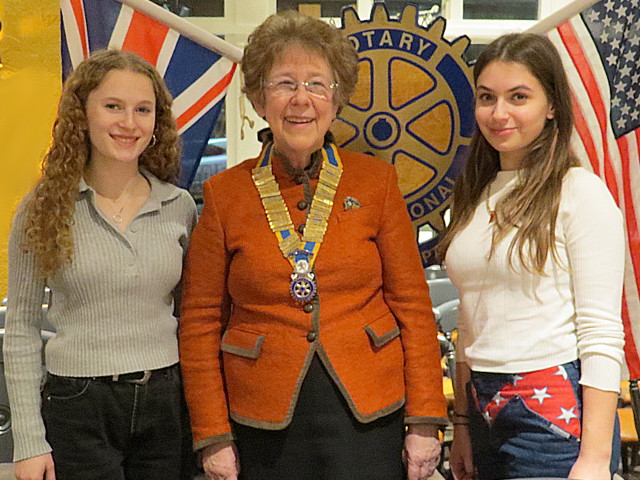 Our speakers on 29 January 2020 were two local students, Danya and Talia, who had been on a Service Holiday in India. But before they spoke to the Club, we had a report on the excellent essay competition prize-giving run by the Rotary Club of Wembley which three members of our Club had attended.  There was an update on George and Sandy, and a reminder by the President of Youth Makes Music, the Dementia Club and the visit to St Mark’s Hospital to see the surgery robot – all spread across the same day!

It was then time for our two speakers.  With a long summer holiday beckoning, Danya and Talia had decided that they wanted to do something more worthwhile than lounging about.  They had found a “Plan A Gap Year” website which offered an opportunity to teach children in a school in Faridabad, near Delhi in India, during the school’s morning sessions in English.  (The afternoon sessions were in Hindi which neither of them understood.)  The programme lasted two weeks during which time they taught classes in English and Mathematics during the mornings and toured in and around Delhi in the afternoons and at the weekend.  They had tried many things including supporting a Women’s Empowerment Project, taking a Yoga Class, visiting Temples, Forts, Markets, Dance Classes and they had even tried their hands at Pottery.

There had been train trips wider afield, visiting Agra – where they saw monkeys on their balcony and Jaipur – where they saw elephants working in the streets.  Their talk and photographs produced lots of questions.  The two were congratulated on their activities and their trip by all the Club.