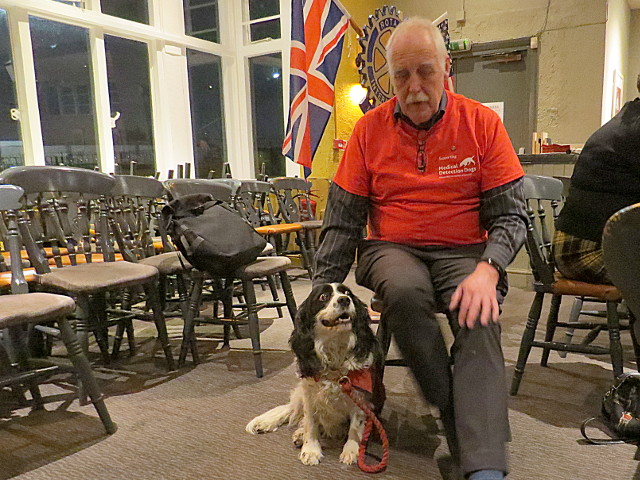 Our speaker on Wednesday 22 January 2020 was Rotarian Geoff Lambert from the Rotary Club of Luton North, who was representing Medical Detection Dogs and had brought “Buddy” to the meeting.  Before Geoff spoke to the Club, we heard about our Interact Club which failed to meet following a school fire, we heard about the Quiz where our team beat three teams (which failed to attend!) but lost to those that did attend, and we heard about the dinner with our former Rotary Global Scholar Katie – which was reported on Twitter.  There will be a Felsted Aid collection on 23 February – Rotary’s Birthday – and the Strategy Group will be meeting on Monday.  There was also a discussion about the new Stroke Association initiative “Make May Purple”.

It was then Geoff Lambert’s turn, supported by Buddy, to make a presentation to the Club.  Medical Detection Dogs are allowed to go everywhere when they wear the bright red coats that have a special logo on the back, and for that reason, Buddy was allowed into our venue.  Medical Detection Dogs trains the dogs for three medical purposes: Helping people live with long term conditions that make life hard; Detecting various diseases and conditions like cancer and diabetes; and predicting medical events for the person they are supporting – for example the onset of hypoglycemia, or the onset of narcolepsy.

Geoff described in detail how dogs are trained to detect cancer and other diseases, and the complications of managing samples, given that the sensitivity of a dog’s nose.  With dogs able to detect dilutions of one part in a trillion, sample contamination is a major issue.  We learned that each cancer has a different smell to a dog, but dogs have been able to indicate that a sample is positive up to 18 months before symptoms appear.

Sadly, dogs cannot speak and cannot say, “I am not in the mood at the moment” and that makes the detection process less than 100% reliable.  But the work that Buddy has done has saved lives, and has made the lives of survivors much more comfortable and positive.  This was an excellent talk that held the attention of the Club and led to many questions.