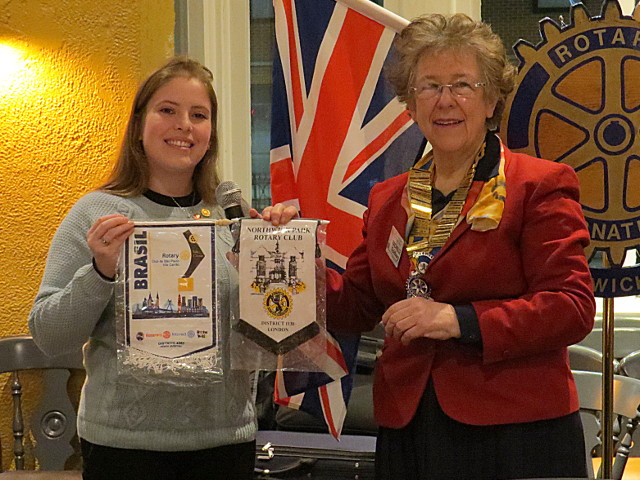 Our meeting on 15 January 2020 was a Business Meeting, but there was time during the meeting to hear from Gabriele Ferreira who comes from Brasil (or Brazil in English) and has been sponsored by the Rotary Club of São Paulo Vila Carrão.  Gabriele studied Journalism for her degree in Brazil and is currently on a New Generations Service Exchange here in London.  This is a programme that requires a Rotary Service Project to be undertaken overseas during a relatively short stay.  We all wish Gabriele as safe return journey next month when she flies back to her home city of São Paulo.

Reports of visits followed including the District Ten-pin Bowling tournament, a concert in the Rotary Club of Mill Hill and the funeral of Peggy de St Dalmas.  We then moved on to good news with a member joining a regulating body, an incomplete experience with smart meters and a grandson making his way to Sandhurst.  There were a number of reminders of forthcoming events, and a report on our appearances in the local media. 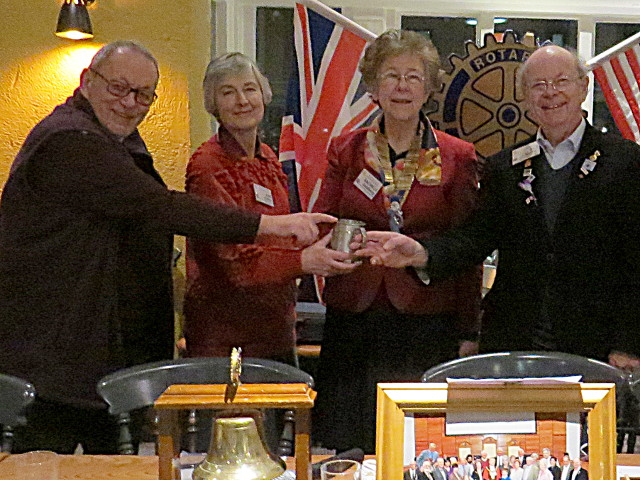 The President then awarded the Fellowship Cup for December to Sydney June and Dick who had all been heavily involved in the preparations for Christmas collections.

With two Club members currently in Australia, the Club made a generous donation to the Rotary Disaster Trust fund which is running an appeal for Australia.  The evening was rounded off with a report on the Youth Exchange Programmes and a chance for Gabriele to address the Club in her perfect English, describing her family life back in Brazil and detailing the work she has been doing for 5 weeks in Southwark and for a Ronald McDonald house.  She was then able to send a photo of the meeting to her own Rotaract club that was meeting at lunchtime in Brazil.  Oh the wonders of the Internet!