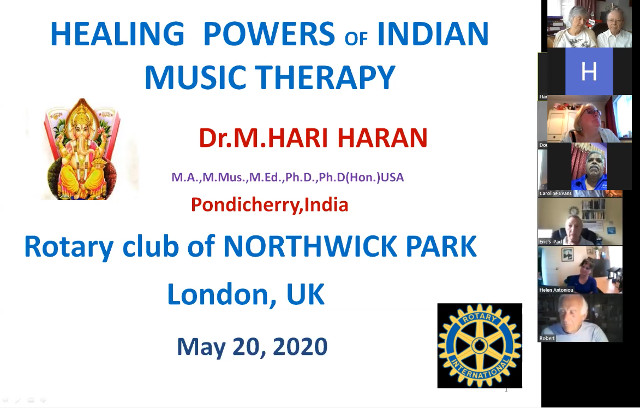 Our speaker on Wednesday 20 May 2020 was a Rotarian from India, Dr Hari Haran MA, MM, MEd, Phd (x2) from Pondicherry was introduced by our President Elect. He talked on how to face COVID-19 better with Indian Music Therapy. He explained that the virus cannot be contained using just music, but the virus can be ‘met’ with music. He played his PowerPoint Presentation from his home in Pondicherry (at quarter to one in the morning!) but did suffer some technical difficulties as he was using two computers.

He described in detail what is Music Therapy, and produced a list of symptoms that can be helped with therapeutic music. His talk was sprinkled with music moving in tones, semi-tones, quarter-tones and no less than 66 micro-tones. We also learned about Mantras, Astrology, Planetary and Shadow Planetary influence on health, and how to listen to and sing along with the Mantras.  We also learned about the two music systems in India – Kanatic (South India) and Hindustani (North India).

It was an interesting talk, and a Vote of Thanks was delivered by Siva, and supported by applause from those present.