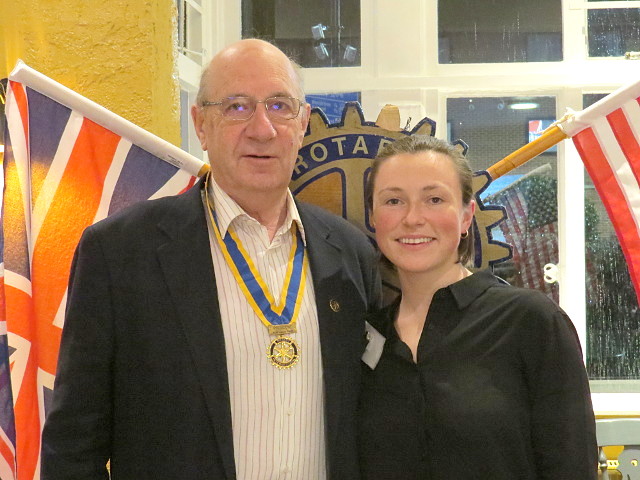 Our speaker on 06 February 2019 was Rotary Global Grant Scholar Katrina Fettes – “Katie to us”  – who spoke on a Water Project in which she has become ‘deeply’ involved.  Before Katie spoke we had a reminder of the Joint Membership Meeting on 20 February with four Clubs coming to visit us, our progress on the District Grant Project with Chattertots in South Harrow, and a special letter of appreciation from London’s Air Ambulance Service for our work raising funds for them.

Then Katie spoke to the club about events that had started in Toronto University where she was studying for a degree in Peace and Conflict Resolution Studies.  There she met James Thuch Madhier, a young man that had grown up in Southern Sudan before the country of South Sudan had been created.  Life there had been hard and food had been scarce, and James had left for Kenya where he took advantage of the education being offered in refugee camps.  He finished High School, and 5 years later applied for, and won, a scholarship to study in a Canadian University, where he met Katie.

James turned out to be a very passionate speaker on the problems of South Sudan, especially on the subject of water.  When the rains fail, not only is there a lack of water, but there is also a lack of food, and agricultural workers are laid off because there is no farming.  People then have to choose whether they will quench their thirst or grow food to eat.  James founded “Rain Maker Enterprise” (www.rainmakerenterprise.org) with the aim of using solar power to pump up ground water.  He won a grant from the United Nations and returned to his home village in South Sudan.  Not having heard from him for many years, they thought he was a ghost!

James still speaks at conferences and at churches and schools.  There are technical problems with using solar power to raise water – sometimes from 120 metres below ground, but he seems determined enough to overcome any problem.  Thank you Katie for introducing him to our Club, and thank you for a really interesting talk.