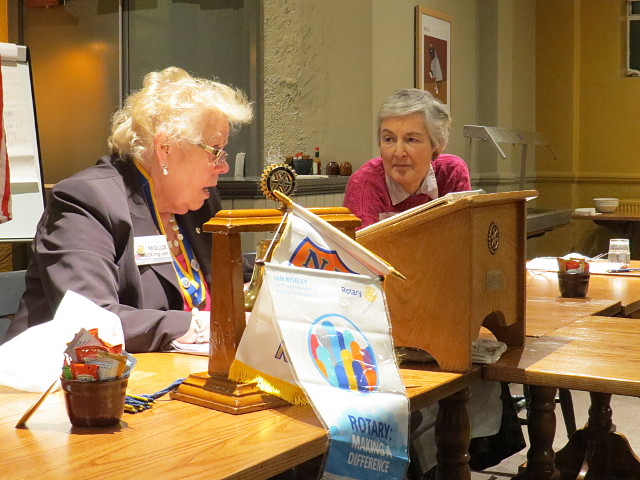 Our meeting on St Valentine’s Day, 14 February 2018, turned out to be a quiet meeting in numbers, but an intense and important meeting in terms of business.

We started with the usual items dealing with the welfare of absent members and those who were attending other activities that evening, and we also received the news of the two prospective members in the pipeline.

The tickets for the forthcoming Rotary Youth Makes Music Concert at the Royal Festival Hall on 22 February 2018 were then issued to the twelve members who are going, and then the business got under way.  There was an intense (or in tents!) discussion concerning our role in the Pinner Village Show, and after consultation with the President Elect, it was agreed that the Club would take part on 8 September 2018 with our usual selection of games, face-painting and bric-a-brac.

Under the heading of Community Service, there was a frank and earnest discussion of the forthcoming Dementia Club starting at John Keble Church in Edgware, and the Dementia Club running in Borehamwood.  Edgware, being much closer to our base, was chosen as the venue for our members to participate.  That was followed by a long debate on the Stroke Association’s Blood Pressure Day.  The national day is set for 14 April 2018, but there was concern that the weather would be too cold on that day.  In the end, we settled on 26 May 2018 as too many other Saturdays were already booked.  There will be some keen meteorological activity comparing the temperatures on the two dates!

Club members were encouraged to attend the District Assembly Dinner on Monday 26 March 2018 at the Imperial Hotel, Russell Square at a cost of £30 per person.  We then had a discussion about a motion concerning the selection process of our national leaders in Rotary, and the Club agreed to second a motion at the Annual Business Meeting of Rotary International in Great Britain and Ireland so that the proposals could be debated.