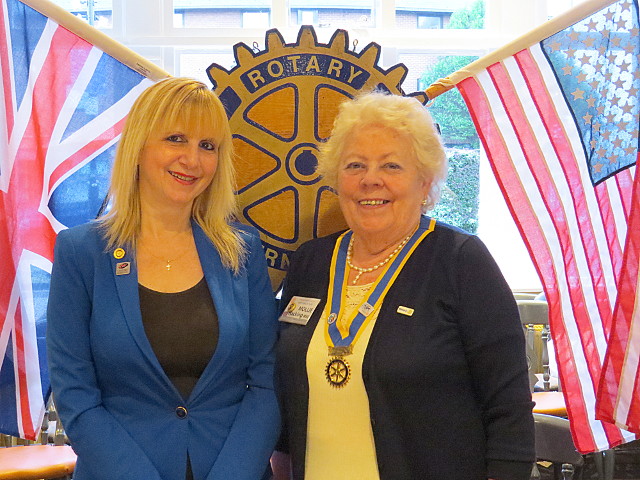 Our speaker on Wednesday 23 May 2018 was Lisa Rutter, past Mayor of the London Borough of Barnet, and the moving force behind Dementia Club UK.

Before Lisa spoke to the Club there was the usual business, including the results of the International Meal on Sunday 20 May (nearly £340), progress on our members who have been suffering ill-health, the retirement of one of our working members and visits to other Clubs.  Members were also asked to clean and get engraved their trophies before returning them to the Club in time for the handover (John C, Siva, Sandy and Ritu).

We then heard from Lisa Rutter.  She talked about her background, and the jobs she had held before taking up local politics.  She described politics as hard work and not easy, but after being elected to her Borough Council in 2006, she was inspired by the difference she was able to make.  In 2011-12 she served as Mayor, and during her year she met many people, organisations and companies.  She quickly saw that as Mayor, she was able to get exposure and recognition for people, organisations and companies in the media.  She decided to support three charities in her Mayoralty: Barnet Young Carers, Outward Bound Trust and the Alzheimer’s Society.  The last was most poignant as her mother had just been diagnosed with dementia.

Funds for the Alzheimer’s initiative from her year as Mayor were soon consumed, but her work in the community was spotted by Nigel Wray of Saracens Foundation, and they offered to take on the costs incurred by Lisa’s Clubs for Dementia sufferers and Dementia Club UK was launched.

Lisa found a formula that worked for the Dementia Club UK meetings, and quite wisely got her work assessed by academics at Middlesex University.  They confirmed the meeting design was delivering, and so the meetings of all the Clubs now follow the same pattern.  The meeting is divided into four parts so that Club Members and their Carers are occupied and entertained, including music, exercise, a short talk, and singing.  Dementia Club UK will be conducting a special launch of the Club supported by our Rotary Club on 18 July 2018 at John Keble Church in Deans Lane in the afternoon.