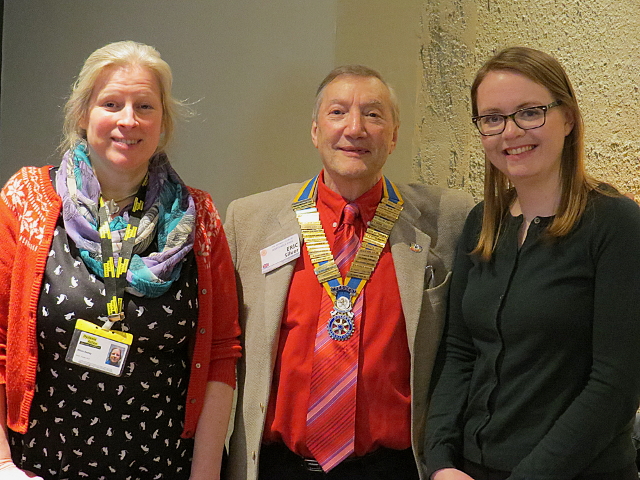 Before the formal meeting began, members paused to think on the sad news concerning Police Constable Keith Palmer who had been on duty at the Palace of Westminster that afternoon.  Rotarians everywhere will now have a deeper appreciation of the Rotary Motto, “Service above Self” after today’s events.

Our speakers on 22 March 2012 were Alison Keeley (left/red) and Becky Whitman (right/black), from Dyslexia Action, a group dedicated towards providing help and assistance to those suffering from this learning difference.  Dyslexia is a label, rather than a specific condition, which describes a difficulty converting what the eye sees into what the brain reads.  It is not related to intelligence, and because it is difficult to measure its effect, it is thought to be a condition experienced, to different degrees, by as many as 6 million in the United Kingdom.  Some tests try to assess the degree of the difference by reversing strings of characters and reciting them – e.g. spell “S-I-L-E-N-C-E” backwards.

Dyslexia Action receives no government funding, but has been operating for 40 years from, currently, 21 centres. Dyslexia Action organises a range of projects, for example Catch-up Clubs, and their ‘cloud-based’ programme Units of Sound.  Much, but not all of their work, involves children.

As our world becomes more text and screen based, the prevalence of this difference becomes clearer, and the ease with which adults can circumnavigate their difference is reduced. One project for one year typically costs £12,000 p.a.  Well done Alison and Becky on an interesting, informative and motivating talk.