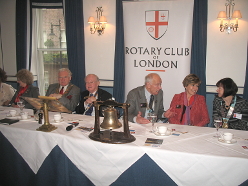 Six members of the Club went along the Chesterfield Hotel in Charles Street in Mayfair on Monday 17 November 2014 to help celebrate the Stanley Leverton Lunch with the Rotary Club of London.

Pictured above (from the left) are Rotarian Di King from our club, Rotary International in Great Britain and Ireland President Peter King, President of the Rotary Club of London Clive Amos, District Governor David and Jenny, and District Governor Jenny Muir from District 1260 (Hertfordshire and part of Buckinghamshire).

Peter King told the story of Stanley Leverton’s Rotary career (1914 – 1964) and how he plugged away for 10 years to get the Rotary Constitution changed so that the Rotary Club of London could permit new clubs to be formed within its territory. It was finally adopted, and it brought about the establishment of many new clubs in the Central London area.

The meeting was well organised and ran to time, including a collection for funds to support the Ebola crisis in West Africa.