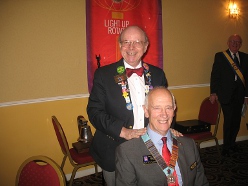 Dick described his year at the breakneck pace that has distinguished a year full of activity and development for the Rotary Clubs in London. In particular he thanked the members of the Rotary Club of Northwick Park for their support at the District Conference (where they all wore bow-ties) and for their support on the Ukraine Minibus Project being run by the London District.

David Palmer gave full credit to Dick for a year that has seen much strengthening of the District structure and operation. He also joked about Dick’s capacity for sending and receiving emails, and his thoroughness. He described how Dick was known throughout Rotary in Great Britain and Ireland as “Mr Rotary-in-London”, and thanked Dick for all the hard work he had done for the District and its standing in Rotary International.

The Club presented Dick and June with a pair of engraved crystal goblets, and charged them that the goblets were not for show but to be used at every possible occasion!

This entry was posted in Latest News and tagged Club Events, Rotary News. Bookmark the permalink.