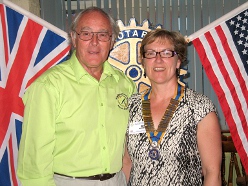 Our speaker on Wednesday 25 June 2014 was Brian Stoyel. Besides having a long and distinguished career in Rotary, including being the President of RIBI in 2003-04, Brian has had an enduring interest in Malaria.

Malaria became an interest when he was working on a joint Rotary/Rotaract construction project in Arusha, Tanzania, and noticed regular absences from the local volunteers. Whenever he asked for the reason, he was told it was for a funeral – usually for a child that had died from Malaria. Even today, 3,000 die every day from Malaria and 95% of those that die are under 5 years old. That shocking statistic inspired the start up of REMIT – Rotarians Eliminating Malaria in Tanzania.

Brian described how it is only the female mosquitoes that carry the parasite that causes the disease, and how attempts to kill just female mosquitoes with insectiside had succeeded for a short period of time. However, the parasite being so simple can quickly adapt and it had become resistant to many insecticides. Killing all the moquitoes in Africa would help but is not practicable; instead, there is now an attempt at chemical castration of the male mosquitoes.

Whilst vaccines are being developed, it is Bed Nets that are effective. Each bed net costs £2.50 including the cost of the insecticide that is impregnated into the net material, and provides effective protection for those sleeping inside the net.

At times, Brian’s light-hearted delivery caused much levity and laughter whilst dealing with a serious subject. For many years, the Clubs ‘fines for minor misdemeanours’ have purchased many hundreds of bed nets for the people of Tanzania.

Also, Dick and June were back from their travels, and presented a selection of banners from their visits and exchanges.