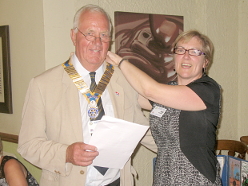 Every 1st July in a Rotary Club, the jobs and the officers change. Our club is no exception to the rule, with President Ros winding up the year 2013-2014, and Bryan opening his account for the year 2014-2015.

Ros Morris took us through the year with a photo-library driven by PDG Robert Morris, showing the two District Handovers, two weddings of Club members (and not to each other!), the two conferences (District and national) and two different types of Youth activities (Exchange Camp and Competitions). Sadly, two members of the Club died during the year, but their images were there for those that could see them in the library.

Ros then presented the Club trophies to selected Club members: 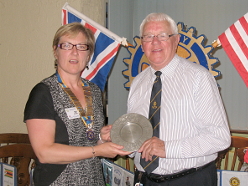 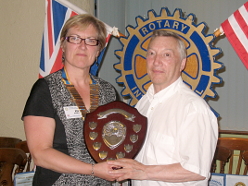 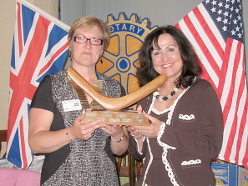 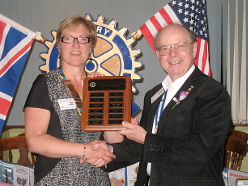 Rotarian of the year to Dick 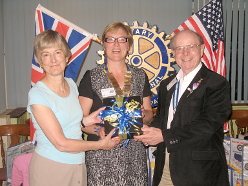 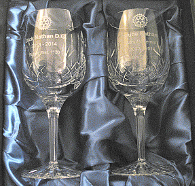 Close-up of the goblets

In a moment, President Ros had placed the Presidential Collar on Bryan and the club had a new President (see top). 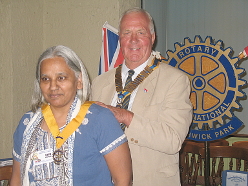 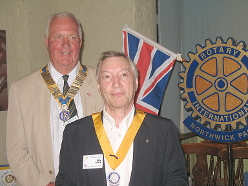 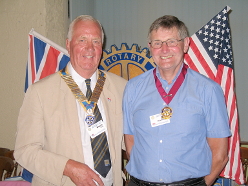 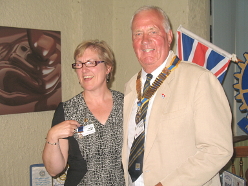 President Bryan then gave his inaugural address, thanking his Rotary colleagues and his family for their support – his wife and children had come to support him at the event. He spoke about the day he was invited to join the Club, and discovered that several customers were members of the Club! He hoped he could repay the trust invested in him during his year as Club President. He expected there to be a few hiccups along the way. However President Ros had done such a good job, she would be a hard act to follow.

His first act as Club President was to call for a toast for the three club members that had “passed to higher service” in the past year – David Parker, David Hooper, and Owen Hampton.

And with that, we had a new Club President, a new programme and a new Rotary Year. Well done President Bryan!