RIBI Handover on board 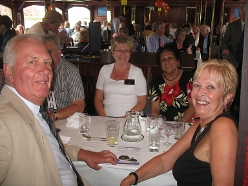 President Bryan and Joan with friends

Peter King waits for the Elizabethan

On Saturday 5 July 2014 President Bryan and some 16 members and partners from our Club arrived at the Waterloo pier on the River Thames to take the Elizabethan Paddle Steamer on a lunch cruise at which Peter King was inducted as President of Rotary International in Great Britain and Ireland (RIBI). Peter King (above right) was inducted by Amanda Watkin, General Secretary of RIBI, who stood in for Nan McCreadie who was unable to attend.

Club members enjoyed the cruise between Battersea Park and the O2 Arena, as well as the three course lunch that was served on board. 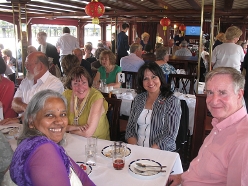 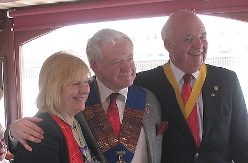 This entry was posted in Latest News and tagged Club Events, Club Socials. Bookmark the permalink.