Everyone got the same ration! 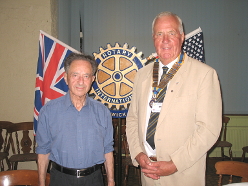 Our speaker on Wednesday 30th July was Graham Zeitlin, who spoke about growing up in World War 2.

Graham was 9 years old at the start of World War 2. He lived in Birmingham and was the son of a tram driver. Contrary to the popular view, not all the children were evacuated and Graham actually stayed in Birmingham for the duration of the war. Children who were evacuated to Lichfield actually cycled home to Birmingham for the weekends! Graham had no holiday from school just because there was a war; his school was actually bombed and even that provided no respite, with an alternative building being used until the school was repaired and available again.

There were no after-school activities during the war for three reasons: 1) The bombing took place after dark, so everyone had to get home as early as possible; 2) The blackout made evening activities difficult, even with the Double-Summertime introduced during the war; 3) The teachers and community leaders were committed to Home Guard and similar activities, often for the whole night, and so were too tired for sports and clubs.

Children were encouraged to support the war effort, and Graham was no exception, putting on puppet shows with home-made puppets. Entry to the show was free – exit from the show involved a charitable donation!

Graham told us everyone – from king to pauper – got the same food ration based on their ration book. Many people found ways to supplement their allowance, either by ‘Digging for Victory’, or ‘Lending a Hand on the Land’ or keeping chickens in the back garden.

With many photographs and ration books and clothing coupons, Graham’s entertaining talk lead to a series of questions and recollections – an accomplished speaker with an interesting story to tell. Well done Graham!