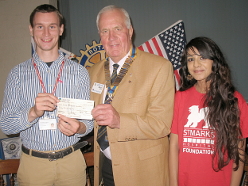 Our speakers on Wednesday 22 October 2014 were Alex Burton and Sameeha Visram, from St Mark’s Foundation, the fundraising organisation of St Mark’s Hospital on the Northwick Park campus in Harrow. St Mark’s is recognised as a world centre of excellence for bowel cancer treatment and research.

St Mark’s Hospital was founded in 1835, and for a long time was located on City Road close to Moorfields Eye Hospital in the City of London. During that time, it became a centre of excellence, and even Charles Dickens was a patient there! In 1995, the hospital moved to the Northwick Park campus in Harrow.

The hospital deals with many different conditions and diseases in addition to its work on bowel cancer, and is heavily engaged in developing an ‘artificial bowel’, using tissue engineering techniques. We were told that the team working on this project is hoping for an early breakthrough. This could complement their work on removing polyps and other pre-cancerous growths.

Neither Alex nor Sameeha is on the medical team, but are fundraisers for St Mark’s. They seek financial support and volunteers to help with the fundraising task. With bowel cancer being the second highest cancer killing patients in the UK, their work is worthy of the Club’s support, and they were presented with a cheque by President Bryan.