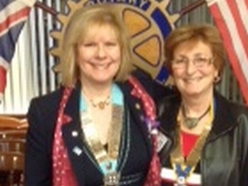 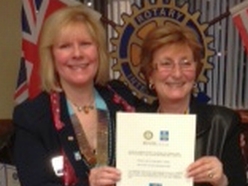 On Wednesday 16th January we were pleased to welcome to our meeting District Governor, Eve Conway-Ghazi.  She said she felt she was amongst good friends and she paid thanks to Dick, Di, Sydney, Helen, Lucille, John Evans, Robert and Mike for their work in various District Offices.  The DG also thanked the club for staffing York Gate during the Olympics.  She mentioned that the enthusiasm for the Olympics had produced 2,000 enquiries about Rotary, many from Londoners, and 12 had translated into membership.  The Jamaican Paralympic team, including the medallists were entertained at a Reception at York Gate, many of whom were former polio sufferers.  This lead the DG to update us on the current situation regarding Rotary’s efforts to rid the world of polio.

The DG reminded us all that this year’s theme was ‘Peace through Service’ and of the District projects to this end.  This year a concert was to be held in St. Marylebone Church on 23rd February, Rotary’s birthday, to celebrate the year’s achievements so far and on 8th March, International Womens’ day, she would be attending a Business Networking event at City Hall where she hoped to publicise Rotary’s achievements.   Mention was made of the ever necessary need for new members and questions lead to a general discussion on the subject.  The evening ended with Eve thanking the club for helping to make it a Great year for her and President Sandy thanking the District’s first lady Governor for all she has done for the District.