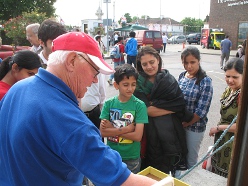 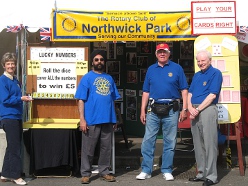 For the first time, the Club was present at the Neasden Swaminarayan Summer Fete held over the Jubilee Weekend in the grounds of the Swaminarayan School in Neasden. Armed with a special dispensation from Buckingham Palace, members of the Club turned up to man our stall in the school car park over the Diamond Jubilee weekend. Our stall included three of our usual summer fete games – Lucky Numbers, Play Your Cards Right and Break The Safe. The Saturday afternoon was busy despite a high wind and an increasingly cloudy sky. Sunday – the day of the River Pageant in the centre of London – was interesting weather, in the sense of the “Chinese curse”. That said, we had really marvellous support and help from the staff of the Swaminarayan School in setting up and pulling down, and we were able to reciprocate by offering our two gazebos to the school when they moved us into a large booth set up by their contractor. Although the takings on the games were less than we had hoped, we were mostly busy on the stand, and hope to convert the 20+ enquiries about our Club. What was best however was the in-depth knowledge of the work of Rotary International in the local community in Neasden. Let’s do the same thing next year!