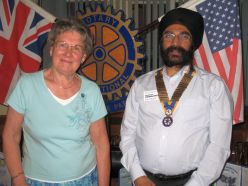 Our speaker on Wednesday 30 May 2012 was Jean Newby who came to talk to us on the subject of Fairtrade. Established in 1994 by 5 Non-Governmental Organisations and Tradecraft, some 70% of people recognise their logo on products today. Jean started with breakfast, asking which members had consumed orange juice, cereal, tea, coffee and so on until only a few members were left who had consumed none of these items for breakfast. She linked this example to Martin Luther King’s quote, “Before we leave for our jobs we are already indebted to more than half the world.” Jean showed films of Fairtrade bananas in the Dominican Republic, Fairtrade coffee in Uganda, and Fairtrade cotton in Mali, where 5 times Olympic Gold Medalist Sir Steve Redgrave tried picking cotton for use in his clothing factory. The better price the workers achieve for the Fairtrade products is used to help their villages develop water supplies, schools and warehousing. Jean brought many mouth-watering Fairtrade products to show the many varieties available in the multiples. Well done Jean for an interesting talk!