Club Does Its Best 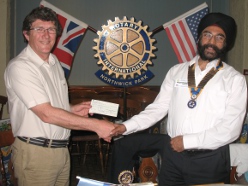 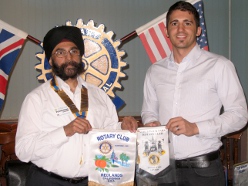 Our speaker on Wednesday 23 May 2012 was Gary Sanders who came to speak on the future of Scouting in our locality and in the world. Gary took us through the history of scouting from the first beginnings in the Boer War in South Africa, to the first camp in the UK in 1907 on Brownsea Island in Poole Harbour at which just 20 boys attended, all the way up to the current day. Gary told us that there are about 500,000 scouts in the UK today, with the sections for 6-8 years old (Beavers), 8-10 years old (Cubs), 10-14 years old (Scouts),  14-18 years old (Explorer Scouts) and the Scout Network for those over 18. Gary told us about the Jamborees, the Promise, the Scout Laws, and the motto “Be Prepared”! He also explained the origin of the special left-handed Scout Handshake – Rotary does not have special handshakes, so we were all keen to learn. On a worldwide level, there are 28 million Scouts in 216 Countries and Geographical Areas. The movement is still growing despite the problem of finding leaders. Well done Gary, and all success to the 22nd  Hampstead Sea Scouts! The Club was pleased to make a small presentation to the troop. Also that evening, we had a visit from our Scholar, Dennis who was back from his trip home to California, where he had brought a banner from his sponsoring Club in Redlands, CA.