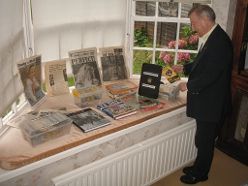 Over the past few months, following a visit to the club by the local branch
manager of the Harrow Alzheimer’s Society, Linda Matthews, the club has been
preparing its Memory Boxes for its Memory Café. Using guidelines provided by
the organisation Rotarians Easing the Problems of Dementia
(www.repod.org.uk), the members of the club have searched through their
belongings and assembled, with some specially purchased goodes, four Memory
Boxes for use in Harrow. It turns out that many sufferers of dementia, and
Alzheimer’s in particular, have a good long term memory but have a deficient
short term memory. The lack of short term memory is a cause of anger and
frustration. Stimulating memories from long ago is calming and rewarding to
the sufferers, and that is what is delivered as the sufferers look through
the old newspapers and magazines, and the objects found in the boxes. Past
Mayor of Harrow, Eric Silver is seen here assembling and checking through
the contents, and presenting the boxes to Sue O’Brien, Day Support Manager
of the Harrow Alzheimer’s Society at the Northwood Hills United Reform
Church on Monday 24 September 2012.