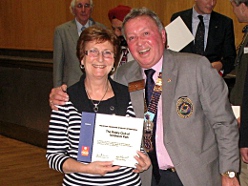 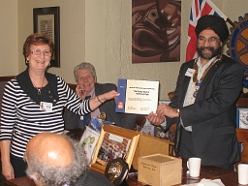 On the evening of Wednesday 22 February 2012, Rotarians from nearly all the clubs in London assembled for a District Council up in the centre of London. To our great delight, our Club was provided with a certificate of appreciation by District Governor Trevor from the Rotary International President 2010-2011 Ray Klinginsmith and Chairman of Trustees of the Rotary Foundation Carl Wilhelm Stenhammar. The certificate places on record the contribution that the club has made to Rotary’s work in  completing the two Bill & Melinda Gates Foundation Challenge Grants ahead 5 months ahead of the deadline set in 2008 and 2009. Since receiving the Challenge Grants, Rotarians around the world have raised an additional $200 million, whilst keeping all their other projects progressing.

Later that same evening, President Elect Sandy was able to pass on the banner to President Pushi, to the great delight of all the members.