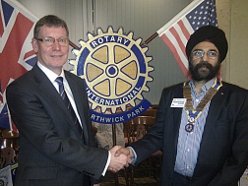 Our speaker on Wednesday 15 February 2012 was Andrew Cox, who is CEO for the Middlesex Association for the Blind (www.aftb.org.uk), based in Queensbury, just a mile or so from Northwick Park. Whilst the majority are not completely blind, there are estimated to be some 46,000 people in the catchment area that have some visual impairment. Their catchment area includes 9 London Boroughs (see their web site for a map), and they have been providing a service in the community since 1922. Andrew spoke about his career in software development, and how he came to the post of CEO. His mission is to help people with visual impairment remain independent in their own homes, and he spoke about the satisfaction he gets from knowing that he has done a good job. Running an organisation that looks after some 800 clients, with 26 part time paid staff and 400 volunteers, on a budget of  £500k per year, we are inclined to agree. Often IT provides a means of dealing with some of the consequences of blindness and Andrew described several examples. With his background in the IT industry, Andrew seems ideally placed to help and encourage the volunteers. The Middlesex Association for the Blind is one of our President’s Preferred Charities for the year, and a small donation was provided on the night with a promise of more to come by the end of the year. Well done Andrew!