Members of the Club were present in some number at the District Assembly Dinner on 2 April 2015 at the Royal National Hotel in Central London. There has never been an event quite like this one – with the recent death of Jeremy Jessel rapidly followed by the passing of the mother of our incoming District Governor, it would have been understood if the event had been called off! 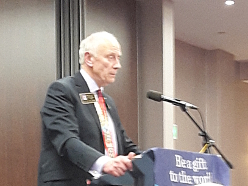 But that is not what happened. The event went ahead as planned, but with different speakers making addresses provided for the evening by those that could not attend. There were nearly 200 Rotarians present to listen to the talks, and judging by comments after the event, it was very well received indeed! Our District Governor, David Palmer (left) ably assisted by Past District Governor Colin Mathews chaired the event.

Governor Elect Toni’s speech was delivered with some force by our Club’s Dick Nathan, 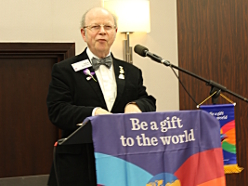 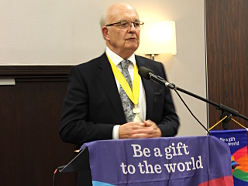 The real message from the event however was very clear. There is real resilience now in our Leadership Team, and despite unavoidable crises, we can continue with the careful plans that have been discussed and agreed by our sequence of leaders. Well done Rotary!