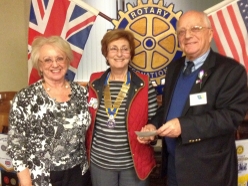 On Wednesday 28th November our speakers were Rotarian Jack Lynes from RC Edgware & Stanmore and Bobbie Riesel,  who were representing Harrow Bereavement Care.

Jack began by talking about taboos and how so many had broken down over the years but death was just about the last one. He gave us a picture of a very busy charity which serves the community well but needs more volunteers. The main attribute of a volunteer is to be a good listener: the ability to support and allow people to express their grief to a disinterested person is of the greatest value.

He talked about the diversity of Harrow and how different faith groups approached bereavement. The charity brings these together in a forum so that they can learn to appreciate each other’s traditions and attitudes.

Bobbie answered some questions. She has been involved with the Charity for many years, having got interested through her synagogue.

Jack said that the purpose of his talk was to gain interest from our club in becoming a Bereavement support group rather than as a fund raising exercise, although President Sandy presented him with a cheque for the Charity.