Careers in Science – full speed ahead 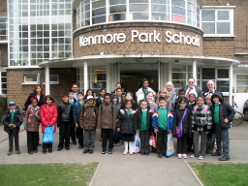 On Tuesday 29th March 2011, a group of 28 pupils and a number of members of staff left Kenmore Park School for a Science Day at Imperial College in London as part of the British Science Week – held at this time every year. The pupils were interested in going to the Winston Room at Imperial College (named after Lord Robert Winston) but there were insufficient funds for the visit. Four local Rotary Clubs, including the Rotary Club of Northwick Park, stepped up to the mark, and provided the funds necessary for the visit to take place. Headteacher Michael Baumring said, “We are most grateful to Rotary for their support – without them this day would never have taken place.”Speaking for the four Rotary Clubs, Assistant Governor Dick Nathan said, “The Rotarians understand our need for scientists. We hope that decisions later on in the pupils’ academic career will be made in the light of their positive experiences at Imperial College today.”