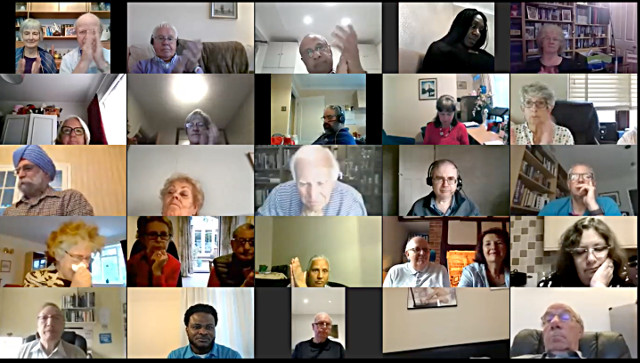 Our speaker at our on-line meeting on Wednesday 15 July 2020 was our new District Governor, Francis Uwaechi from the Rotary Club of London Centenary.  DG Francis had prepared a PowerPoint presentation laying out his goals for the Rotary Year 2020-2021 utilising all his skills as a former secondary schoolteacher!

His three goals included the starting up of three new clubs in the London Area by choosing any of the 7 different types of Club, getting more Clubs qualified for the Presidential Citation, and recording more achievements of Clubs on the Internet through a variety of channels.

He has also set a District Challenge, asking each London Rotary Club to collaborate on one activity with a Rotaract Club.  Rotaract is in an interesting position these days in as much as their relationship with Rotary has been redefined, and their upper age limit (which used to be 30 years of age) has been removed.  Members of Rotary Clubs are also allowed to join Rotaract clubs and hold membership in both organisations at the same time.  Previously, that had not been allowed.

He finished his talk with a quotation from Confucius demonstrating the relationship between planning and success.

His talk was followed by many questions from the 25 members and 7 guests at the meeting.  The meeting then broke up into four Breakout Rooms as an experiment to see how enjoyable the experience was.  The Club has decided to start using the Breakout Room feature in the Zoom software.