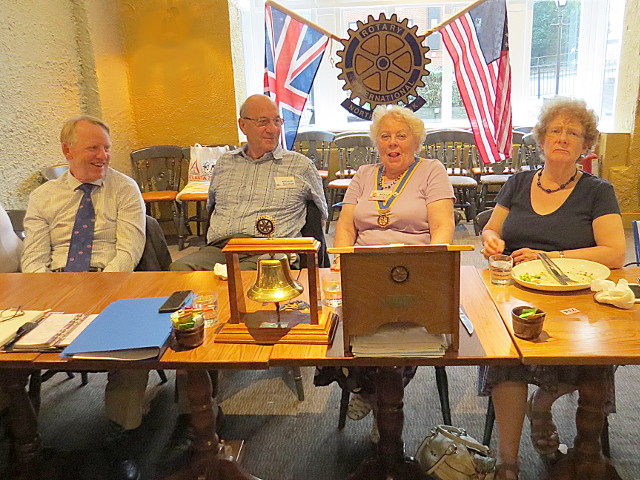 Our meeting on 04 July 2018 had been rescheduled as our Club Assembly rather than our Club Handover, so we will be waiting an extra week before all the jobs change!  Our welfare officer was still absent, and apparently still not very well, and our Moneyman for the meeting had defective hearing aids. But apart from that we were please to welcome back Jo who had been suffering from whooping cough.  It was decided that the Handover Meeting next week will be with partners!

We heard a number of reports on the Rotary International Convention in Toronto, along with visits to various other Rotary Clubs during members’ travels to Toronto.  President Mollie then left the top table so that President Elect Mike could chair the Club Assembly.

Mike is hoping for a fun year in 2018-19, and has chosen the Rotary Foundation UK as his charity.  He asked each member to bring a new potential member to the Club during the year.  The current schemes for WaterAid, Mosquito Nets and for Felsted Aid for Deprived Children were all voted on, and all approved for the coming year.  Mike then handed over to the various chairs to describe their plans for the coming year.

Rachelle emphasised membership retention, and plans to survey the membership, to organise joint events with local clubs, and organise a buffet for potential members and for speakers who have visited the Club.  The Club’s information resources will be updated too.

Eric spoke about the PR successes in the first 6 months of 2017-18, and the poorer 6 months that had followed.  He asked members to provide him with photos so he could write press releases and get them into the local paper.

Andrew called upon the members to enter the District Sports competitions, especially as the Club had won a competition in 2017-18.  A volunteer editor is still required for the Club Bulletin, with the current editor having stood down after completing nearly 50 editions.

Helen outlined a substantial plan of activities in the Community and Vocational fields. She called on the members to work as a team on Health and Well-being projects including the Dementia Club with its launch on 18 July 2018, and the Blood Pressure Day on 15 September 2018 at Morrisons, Hatch End.  St Luke’s Hospice would also feature more strongly in the coming year.  Support would continue for Bottle Tops, the Disability Games, the planter, the hospital garden and the Pinner Village Show.  She called on the members to use their vocational skills for the benefit of those in need.

Ros takes over Foundation which will be the President’s chosen charity.  Another District Grant would be sought, and Mollie would be counselling a Rotary Scholar this year. Support for Polio Plus and Crocus Corms would continue as well, and more attention would be given to the fundraising side of the job.

Youth Service had had ups and downs last year, but the emphasis would start to transfer from secondary schools who are too busy, to primary schools where Young Writers, Young Artists, and Young Photographers can also be found. Pankaj would take full advantage of the strong team that had been provided.  Youth Exchange would continue under Di with the Long Term Exchange Student coming to the Club for a year under the counselling of John and Caroline, and being hosted at various homes through the year.

A short report on International was given for Lucille, emphasising continuity for the existing schemes.  The fundraising targets for the different projects were not discussed.

Mike closed the assembly with a repeated appeal for an Assistant Secretary, and the announcement that the Compliance Confirmation Form would be signed in the near future.  Assistant Governor Scott gave a good summary and expressed his appreciation of the work being done, and with that the meeting came to an end.