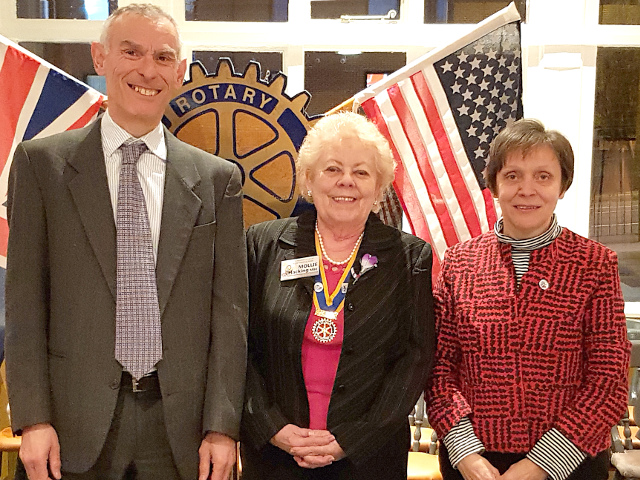 Our speaker on 04 April 2018 was Paul Baker, pictured here with President Mollie and Ginette Baker who comes from the Rotary Club of Barnet.

After our usual business, Paul set about explaining a complicated battle that was possibly one of the last open battles of the Wars of the Roses.  Two households, both alike in dignity … but in England rather than Verona … met on Sunday 14 April 1471 at Barnet.  One house, Lancaster (wearing a Red Rose), supported King Henry (who was unable to attend as he was locked up in the Tower of London 6 years earlier) opposed the other house, York (wearing a White Rose), with Edward at its head.  In case that explanation  is clear, King Henry’s son, also an Edward, got involved in the battle too.

A key factor in the outcome was the decision of Richard Neville, Earl of Warwick, to change sides before the battle.  He had been a supporter of York, but took exception to some of their actions and joined Lancaster.  He led the Lancastrian army at the battle.

The battle was fought on a Sunday in dense fog, and that is one reason why there was so much confusion.  The lines were to advance on each other, but in the dense fog no one could see the lines.  Both right flanks advanced too far, and ended up turning to cut off the retreating opposition.  Having defeated their opposition, the flanks turned in and advanced and attacked their own lines in the centre.  Seeing the confusion, and hearing cries of treason, the Earl of Warwick tried to leave the battlefield but was struck off his horse and killed – possibly by his own side.

At the end of the day, there were 1,500 dead, and Yorkist army, which had been outnumbered nearly 2:1 by the Lancastrian army, claimed victory.  The good thing that came from the Battle of Barnet was a sort of stability that lasted 14 years.  The stability however was overturned again in 1485 at the Battle of Bosworth Field.  Historians argue about when the Wars of the Roses finally finished, but with the winner of Bosworth Field marrying a princess from the other side, both parties had an interest in maintaining the peace.

We are indebted to Paul for explaining these events in a clear and lucid way.  If only today’s conflicts could be explained as simply!