Visiting Ukraine for a Week 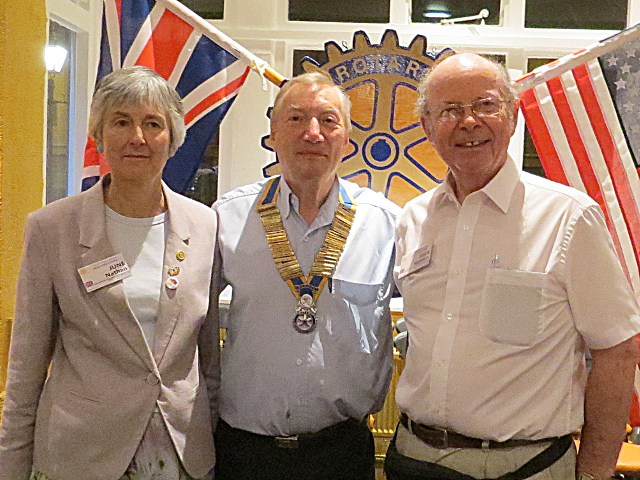 Our meeting with partners on 31 August 2016 had two of our members, June and Dick Nathan, as our speakers.

We were delighted to be joined by two of our Friends for the evening, Arnold and Leonard, who were both accompanied by their partners.  It was a delight to see them back with us again.  We were also delighted to see Pam and Margaret who had come along to the meeting with their other halves.

President Eric was delighted to hear that we were in the Harrow Times again, this time with the load for UK-AID.  We are also to have our own equipment chest at the venue.  There was also an announcement concerning the current position on aid following the earthquake in Amatrice.  On the sporting front, we have won a bye in the first round of the quiz!  The Club also wished Celia Baker, who had featured at the District Handover, a very happy 96th birthday!

It was then time for June and Dick who described a frenetic week in Ukraine. The main reason for the visit was the Final Report for the Rotary Foundation on the District Minibus project.  But this coincided with celebrations for the 20th Anniversary of the Revival Centre, the 25th Anniversary of Ukraine’s Independence, the formation of a new Rotary District – District 2232, and the opportunity to enjoy the sights and culture of the Ukraine’s Capital City.  There was also a major project being discussed with the Rotary Club of Kiev-Citi who had been a vital element for the success of the Minibus Project.

There were many photos – over 100 – and 3 videos, and it was all done in 30 minutes! The Ambassador to Ukraine, HE Judith Gough, and the General Secretary of Rotary International, John Hewko, featured in the videos.  The main comments made concerned the need for a holiday after the ‘holiday’, and the growing demand for the work and materials being made available at the Revival Centre in Chernihiv.  Sydney gave the Club’s vote of thanks commenting that all the walking would have been too much for him!  It was an inspiring insight to life in a different culture.