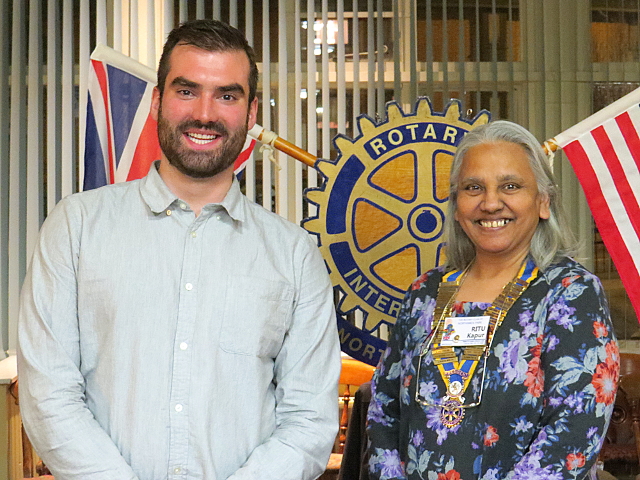 Our speaker at our meeting on Wednesday 23 March 2016 was Rotary Global Scholar Matt Heffler.  But before he spoke we heard the results of our  Supper Quiz Night – and it was very close to the estimate announced on the night of the quiz.  We also heard a proposal to run a Christmas Lunch for the Elderly and Lonely, about a week before Christmas.  There is still more work required to flesh out the project idea.

Matt then addressed the Club.  He is studying for a PhD at Kings College London, where his subject deals with the connection between Secret Intelligence (Spooks) and the policy a government decides to pursue as a result of processing that intelligence.  Matt is sponsored by the Rotary Club of Halifax Harbourside in Nova Scotia, Canada and got his first degree in History.  His Masters Degree was taken at Calgary where he was intrigued by one of the taught modules on Secret Histories .

Whilst at KCL he makes abundant use of the National Archive at Kew, in South West London, where he has access only to the papers that are released to the public.  Whilst some papers are released after 30 years, many involving ‘secrets’ may have to wait until 60 years or even more before they become available.  Much of his work at the moment relates to the period from the end of World War 2 until the Suez Crisis of 1956.  In particular, the career of Sir Anthony Eden is a particular area of interest.

There were many questions after his talk dealing with the United Nations, with terrorism in the current climate and the effect of Edward Snowden’s disclosures on the Security Industries.  Thank you Matt for an interesting and fascinating talk, and we sincerely hope that your appearance at our Club does not impinge unfavourably on your future career!