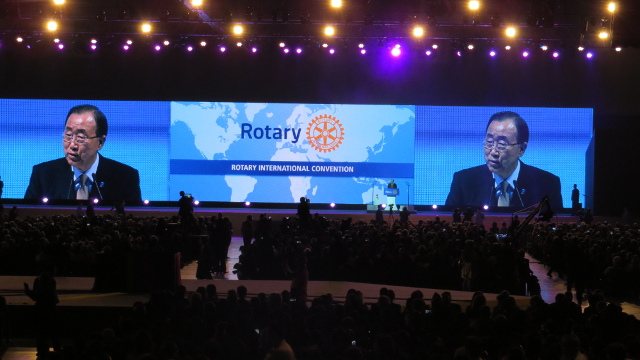 At the Rotary International Convention taking place in Seoul, South Korea, the Secretary General of the United Nations, Ban Ki-Moon altered his schedule to stop off in his home country to say “Thank you!” to the 46,000 Rotarians present at the 2016 Convention, for their work in Eradicating Polio.

So far, since 01 January 2016, there have been only 16 cases of the Wild Polio Virus in the whole world.  With 5 cases in Afghanistan and 11 in Pakistan this year, Rotarians have never been closer to their goal of eradicating the disease.  Rotary District Governors covering both countries gave their personal commitment to overcoming the final hurdles in conquering this crippling disease.

Secretary General Ban Ki-Moon expressed his extensive thanks during his 10 minute address to the Rotarians.  He summed up his message in four words – “Thank you very much!”