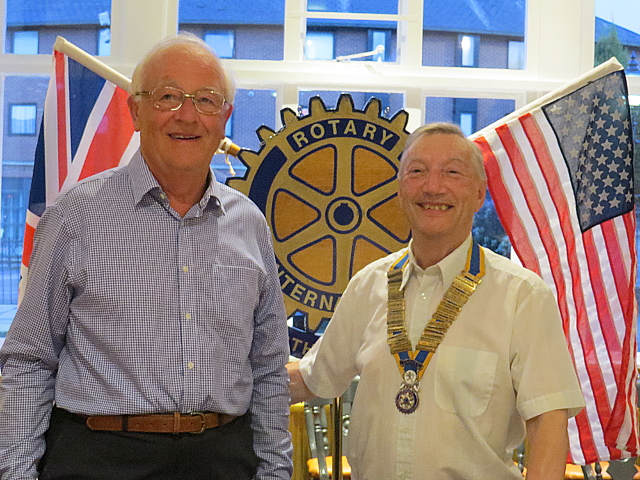 Our speaker on Wednesday 17 August 2016 was Brian O’Dolier whose subject was “Flight from Persecution”.

Brian’s wife, who made a fleeting appearance at the meeting, is the last member of the Freund family who lived in Geiwitz in Silesia.  Brian told the story of her family from about 1729. Being Jewish and living in Germany – even at that time – ensured an ‘interesting life’ and Brian included mention of the Rosenthaler Gate which monitored the movement of Jews into and out of the city of Berlin.

We had a chapter dealing with the first world war, and the significant involvement of Jews in the Kaiser’s Army – a far greater proportion of Jews enlisted than ordinary citizens.  After the first world war, the family developed its interests from Electrical and Metal works into Audi Sales, a change that coincided with the calamitous inflation.  There was also a section on the families rapid movements around Europe prior to the start of the second world war.

With the arrival of Adolf Hitler in 1933, the Jews suffered for many years from taxation, from job discrimination, from disenfranchisement and many other deprivations prior to the start of the holocaust.

The second world war saw the family disintegrate with some heading to Belgium, some to the South of France, some to Italy and others to England.  Some of those in Belgium survived the war by hiding in Brussels, but those in France and Italy were shipped to Poland where their story ended.  Those in England were interned, and then split between the USA and England on their release.

All of this was pieced together from a large store of letters that family members had passed between themselves as their lives approached their ends, resulting in the last surviving member, Patricia, receiving all the letters of the others – since about 1880.  A fascinating story – especially in our current times, and one that awakened echos in the lives of the families of many Club members.  Thank you Brian for an excellent presentation.