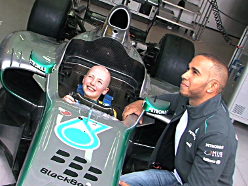 Our speaker on Wednesday 25 February 2015 was Bernard Woolf, a volunteer with the Starlight Charity (www.starlight.org.uk).

Startlight aims to brighten the lives of children who are ill with a potentially terminal condition. They do this by granting a wish expressed by the child, and for the children that receive their wish, some 70% are seen to recover from their condition.  The anticipation and excitement created by the wish being granted serve to distract the child from the pain and uncertainty of their condition, and experience has shown that Starlight’s work makes a huge difference to the child’s prognosis.

Bernard showed two videos: one dealt with the work of Starlight, and the other gave an example of one particular wish granted to Elliott, who is pictured above with Grand Prix Racing Driver Lewis Hamilton in Monaco in May 2013.

Bernard described how two local wishes had been granted to children in the Wembley area recently, and the difference that it had made. Children are usually put forward by social workers in the hospital wards, but a direct request can be made through their web site. The average cost of a wish works out at £3,000 but some cost much less, and some cost more. Starlight proudly announces that 93p in every pound donated is spent on granting the wishes.

Bernard was presented with a cheque by President Bryan in support of Starlight’s work.