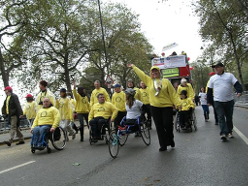 Rotary International in Great Britain and Ireland featured in the London New Year’s Day Parade – this time without support from a London Borough, but with the support of Wheelpower.

In the past several years, Rotary in London has teamed up with a London Borough and appeared in the London New Year’s Day Parade, and event that includes a number of charities and service clubs intermingled with marching bands from the USA accompanied by their cheerleaders.

This year, Rotary International in Great Britain and Ireland teamed up with Wheelpower, breaking its connection with London Boroughs. As you can see in the photo, there was a good turnout from Wheelpower – a charity that helps disabled sports contestants get the wheelchairs they need, and there were Rotarians in support, both walking and travelling on the bus hired for the occasion.

An estimated audience of 300 million see the parade on television stations around the world, and when the weather behaves itself, about 700,000 see Rotary in the centre of London. This year was cold and damp, and the audiences were not quite up to expectation.