Farewell to our friend Jeremy 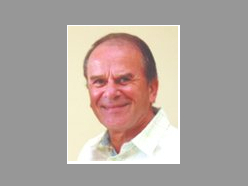 Many members of the club made their way to the Hoop Lane Crematorium to say farewell to their friend, Jeremy Jessel. Jeremy was a member of the Rotary Club of Southgate, and as well as serving as Club President, he had served as an Assistant Governor and District Marketing, Public Relations and Communications Chairman. He had been elected to serve as our District Governor for 2016-2017.

In a long eulogy, the Rabbi announced that he had never seen the chapel as full as it was that day. Every seat was taken, and there was no room for anyone else to stand in the aisles or the doorway.

Born on 30 January 1946, Jeremy inherited his father’s interest in all things electronic. He had an impressive array of computers, tablets, mobile phones and other devices. His working life had included Thorn Lighting and BOC Gases before starting his own business JJ CopyPrint Ltd.

Outside work, he had many interests including music, sailing, collecting power-tools, extreme DIY, gardening and his local community, including his involvement with the Leo Baeck College.

One of his leading interests was Rotary. His dry wit, and at time ‘wicked’ sense of humour will be sadly missed by all who knew him. The Rabbi read the only poem he wanted at the service – by Philip James Bailey – We Live in Deeds:

We live in deeds, not years; in thoughts, not breaths;
In feelings, not in figures on a dial.
We should count time by heart-throbs. He most lives
Who thinks most, feels the noblest, acts the best.
And he whose heart beats quickest lives the longest:
Lives in one hour more than in years do some
Whose fat blood sleeps as it slips along their veins.
Life’s but a means unto an end; that end,
Beginning, mean, and end to all things—God.
The dead have all the glory of the world.