Rotary has got talent 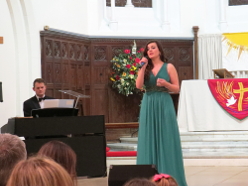 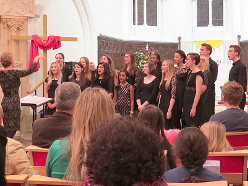 Members of the Club travelled across north London on Saturday 22 November 2014 to attend a concert organised by our friends in the Rotary Club of Loughton, Buckhurst Hill and Chigwell.

The concert held in St Mary’s Church Loughton featured Charlotte Jaconelli, who lives locally. She came to notice at another Rotary Youth Music concert in 2010, and went on to be a runner-up in the Britain’s Got Talent television programme. At that time, she was singing with ‘Jonathan’, but they decided to pursue different paths at the start of 2014.

Also on the programme was the girls choir (occasionally augmented by two male voices) ‘Modality’ under the direction of Jenny Ewington. Modality draws pupils from four schools in and around the Loughton area. A nice touch was that Charlotte, who had sung with Modality whilst at school, and was taught singing by choir director Jenny Ewington, was invited to join them again for their last song on the evening.

The concert was a great success with a range of music from Classical, Opera, Jazz, West End Musicals, and Pop. The event raised significant funds for the Loughton Food Bank, the friends of Jubileee Lodge and other Rotary supported charities. The evening finished with a Vote of Thanks from Club President Pesh Kapasiawala.