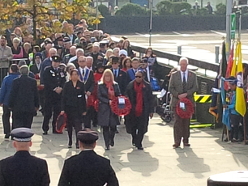 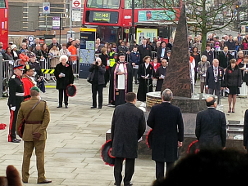 Members of the Club attended the annual Service of Remembrance in Harrow on Sunday 9 November 2014.

The weather held fine for the service, and the contingent from the Club was ably led by President Bryan, who also laid a wreath on the War Memorial outside the Civic Centre, in Station Road, Harrow.

This year saw the Centenary of the outbreak of World War I, and the 70th Anniversary of the 1944 D-Day Landings in Normandy. Thankfully, by this time next year, we will have had 70 years without major conflict in Northern Europe, and whilst we commemorate those who made the ultimate sacrifice, we will have cause to celebrate next year the peace that their selfless acts allowed to develop for our benefit.