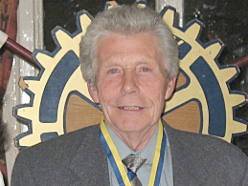 On Wednesday 5 November 2014, instead of a speaker we had a discussion meeting, led by our member John Cone.

John put forward the question, “Is the English Language degenerating?” Club members were not short of opinions or ideas in answering this question. In particular, members offered the suggestion that young people seldom hear the full breadth of the English language, and consequently they fail to develop their use of the language. Added to this was the suggestion that ‘proper English grammar’ is no longer being taught in school, although those members with a background in education disputed this. Our Long Term Exchange Programme student, Mihai, suggested that people learning English as a foreign language seemed to have a much better understanding of English grammar than some of the native students in schools here.

Text Speak, the abbreviations used for mobile phone text messages, combined with the vernacular spoken in some television programmes and films, serve only to impoverish the ‘Queen’s English’. Add to that the repetitious swearing heard in popular television, films and videos, and one could argue that evolution of the language had become degeneration of the language. The loss of conversational skill was provided as an illustration of this assertion.

The Club concluded that English is composed from elements of so many other languages that it has always been in a state of evolution. Comparisons with the English usage of Chaucer and Shakespeare demonstrate the extent of the evolution. The process is likely to continue and concern at evolution is unnecessary.

Thank you John for a stimulating discussion.