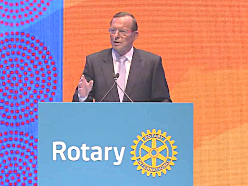 On 20 August 2014, five members of our Club related their experiences at the Rotary International Convention in Sydney, Australia, where the Prime Minister of Australia, The Hon. Tony Abbott MP (above) was the guest of honour on the first day.

With a mixture of talks, slideshows and videos, the five members (in alphabetical order Di, Dick, Helen, June and Mollie) talked about the highlights of the convention, the trip to Australia, and the Sydney Harbour Bridge Climb. The video of the announcement by PM Tony Abbott of a pledge of $100m to Polio Eradication was shown, as was the coverage in the local television news, and a video message of thanks from Bono.

All that attended the Convention seemed very pleased with the event – the only criticism was that with 18,600 delegates it was sometimes hard to meet up with people you know; definitely a nice problem to have!

Also at our meeting was our new Long Term Exchange Programme student Mihai who comes from Romania and will be studying for a year in North West London. President Bryan accepted the banner from the Rotary Club of Arad in District-2241, Romania, and we all look forward to seeing Mihai on a regular basis at the Club. Bryan also presented the Fellowship Cup to Helen who had hosted the International Lunch the previous weekend, which had made £630 for the Revival Centre in the Ukraine! 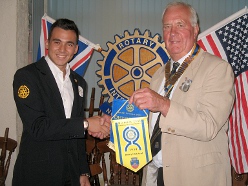 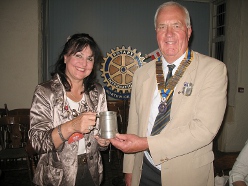