In exchange for an Exchange 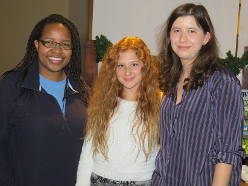 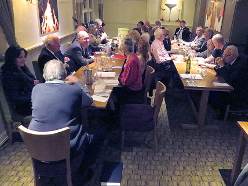 On Wednesday 3 December 2014, we were moved out of our normal room at the Beefeater Kenton, and sited in an alcove in the main restaurant. With a good number of visitors, three speakers and two slide-based presentations, the move represented something of a challenge, but we were up to the challenge and had a most interesting meeting.

Our first speaker was Martha (right in the photo) who hopes to take part in the New Generations Service Exchange (NGSE) programme which includes a service project as part of the visit overseas. A competent linguist with fluency in Spanish, Martha is hoping for a career in the law, possibly within the civil rights area. After NGSE, she would very much like to have an opportunity to apply for a Rotary Peace Scholarship. We all wish her every success in her applications.

Our second speaker was Olivia (centre in photo) who had been on a 3-week Short Term Exchange Programme (STEP) with Carlotta who lives in Turin, Italy. Carlotta had travelled to England first and seen the sights here, including Brighton and Edinburgh! Then Olivia had travelled to Italy and seen Turin with Carlotta’s family, and then visited Rome, Vatican City, Pisa, Lucca, Florence and San Vicenzo. She had enjoyed the programme very much.

Our third speaker was Wendy (left in photo) who had been on a 2-week Short Term Exchange Programme with Nazli who lives in Ankara, Turkey. Wendy travelled first to Turkey, and found it was not at all as she expected. She tried lots of different foods – we had a list – and  spent a lot of time with Nazli’s family and relatives. Nazli then came to London, and together they visited the sights – something Wendy had not done before despite living in London. The exchange had changed her outlook and made her more outgoing.