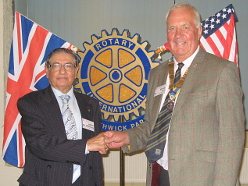 Our meeting on 2 October 2014 was a discussion meeting, with the discussion being led by Amrit Mediratta, on the topic “Immigration – Right or Wrong?”. London is largely a city of migrants when one examines the heritage of those dwelling here from the 11th Century onwards, so this was a topic that had strong connections to many of the families represented in the Club.

England has had a long history of welcoming those fleeing from economic disasters, as well as political and religious persecution. So why do we read and hear so much negative material in the media today on the subject? Each migrant to our country holds the potential to make a positive contribution to our culture and our society. Is the negative message just a case of the last group to arrive pulling up the ladder?

The positives of immigration include new enterprise, cultural diversity and additional members of the workforce who are willing to work hard. The negatives of immigration included significant demographic changes in small localities, reluctance to integrate into our community activities, reluctance to learn our language, and jumping the waiting lists for various benefits and facilities.

Many members of the Club gave thanks that their antecedents had been able to arrive in England, especially in times of difficulty overseas, and concluded that immigration ought to be a ‘good thing’. It was up to the resident population and the local administrations to see that the benefit for all was realised from the granting of a right to join our society.