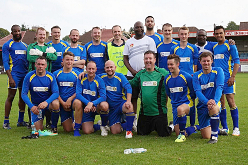 Members of the Rotary Club of Northwick Park were at the Spurs Legends Charity Football Match on Sunday 7 September 2014 in Harrow. The event included a junior tournament for the future football stars, and ended with a match with the Legends XI and a team of sponsored volunteers.

Organiser Nigel Warburg (pictured above in the Rotary tabbard) was delighted with the support received from the Rotary Club of Northwick Park, and delighted with the outcome of the event which looks to have raised in the order of £7,000 for the various charities supported by the event. Asked if he would be organising the event next year, Nigel stated,”Let me have a little time to think about that!”