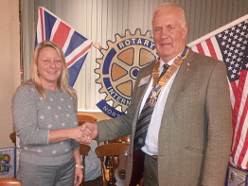 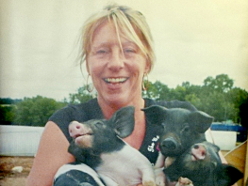 Our speaker on Wednesday 29 October was Tracy Mackness, who describes herself as a Bad Essex girl turned Good!

She was in prison for 10 years for a crime she asserts she did not commit! Having dropped out of school aged 13, she had a career of serious partying, drugs, gypsies, police fit-ups, shocking domestic violence, suicide attempts, and an unintended visit to the inside of some of Britain’s toughest prisons. Whilst working at unloading lorries, she did not realise that there was cannabis in one of the lorries and that led to the prison sentence! She has been married twice but neither marriage lasted, and there were no children.

Whilst in prison, she learned as many trades as she could, completing some 54 courses. Amongst them, she did NVQ 1,2 and 3 in pig husbandry! And with that, she happened on her vocation.

She “bonded” with a mother pig grieving for her babies on a prison farm, and the experience provided the inspiration to start the process of turning her life around. With raw intelligence, charm, and an iron will to succeed, Tracy devoted the remainder of her sentence to learning everything there was to know about pig farming. With her market stall patter and the clever choice of the “Giggly Pig” brand, Tracy became a fixture at London’s top farmer’s markets. She now employs 20 people in a business that looks after 800 pigs and has a turnover exceeding £500,000 a year.

Tracy brought more than 25 varieties of sausages and did a roaring trade with some of the Club Members. It proves that one can do anything with enough determination and hard work. Tracy was voted one of the best speakers we have had!