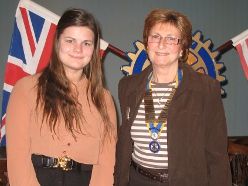 On Wenesday 27 March Sarah Malling from the Stroke Association came to speak to the club.

Sarah told us that she had taken up a position with the Stroke Association two years ago after her partner had suffered a stroke at the early age of 26, leaving him with a paralysed left arm. She is responsible for raising funds for the Association in the whole of the Greater London Area.

She reported that around 150,000 people in the UK suffer from strokes each year, strokes being responsible for 9% of the deaths in the country, the third most common cause.

People most at risk are those over 65 years of age, although about 20,000 younger persons a year can also suffer from a stroke, including children and babies.

Strokes affect 1 in 4 men and 1 in 5 women, although the latter are one and a half times more likely to die from a stroke than men.

Strokes can cause loss of balance and speech and many give rise to a greater or lesser degree of paralysis and it is important to get medical assistance as soon as the symptoms are recognised. It is also important to reduce the risk of getting a stroke by healthy eating and exercise and having a regular blood pressure check. Smoking and excessive drinking can also increase the risk.

Although strokes are the cause of a high proportion of deaths in this country, the funds received for research and rehabilitation are only a fraction of those received by some other national charities.

Following the talk President Sandy gave Sarah a cheque towards the Association.