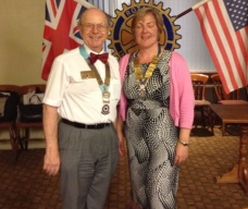 On 28 August our club speaker was our very own ‘Richard D Nathan’ (aka Dick) and as District Governor of District 1130.

Dick brought the message of RI President Ron D Burton that we – “Engage Rotary, Change Lives” and broke this down as – strengthen clubs; increase service; make sure the public know about it.

He developed much of what he spoke about, from attendance at his first Rotary International Convention in Lisbon in June.

One of the main emphases of Dick’s speech was an update on the progress of the End Polio Now campaign – the global challenge to rid the word of this deadly and debilitating disease.  He explained the challenges still left, primarily in 3 countries, in order to bring this campaign to a successful conclusion. The Bill and Melinda Gates Foundation have pledged their continued support for the campaign with a 2 for 1 offer ie they will donate up to $70m for each of the next 5 years so long as Rotary raises $35m for each of the years.

Dick then spoke about some of the changes occurring to ensure that Rotary is a fit organisation for the 21st century.

One of these is the launch of the new RI website at Rotary.org

He also updated on the Corporate Social Responsibility file which has recently been made by St Marylebone club in partnership with the Landmark Hotel and a copy will soon be available to clubs.  The films shows the partnership on a community project between Rotary and the Corporate world and demonstrates a new approach that can be taken by clubs in order to get the name of Rotary more widely known.

There were some questions for Dick followed by the vote of thanks with a difference.  Harold, one of the club’s founding members, had written a limerick in honour of Dick and this was recited with great enthusiasm.